We need your help Tuesday to let the council know if you agree with the recommendation to engage the winning respondent to the Hunt Request for Proposal (see below for this week’s Observer article). Please also ask that the Library Board of Trustees be allowed to oversee the new project, as the $2.5 million rehabilitation grant requires some type of library connection.

As you know, the mission of Save The Hunt is to keep the Hunt Branch Library in the public realm for community use. We wanted to see something as close to a library use as possible, and are especially concerned that the building itself be preserved without undue additional or insensitive construction.

The City of Fullerton has released a Request for Proposals intended to solicit interest in “programming and operations” at the historic Hunt Branch Library. Submission are due no later than 5:00 p.m., Thursday, January 23rd, 2020 UPDATE: The city has extended the deadline for receipt of proposals to February 24. Deliver submissions to the City Clerk, City of Fullerton, 303 W. Commonwealth Avenue, Fullerton, California, 92832.

According to the cover of the RFP, the city is looking for a partner to provide “cultural and/or entrepreneurial type services and programming”

According to the RFP, which can be found HERE,:

“Qualified partnership teams must have significant experience and demonstrated ability to develop successful and high quality literacy, educational, cultural and/or entrepreneurial programs. Qualified teams will have experience collaborating with various organizations and managing educational programs and services. The selected partner(s) will be responsible for programming and operations at the Hunt Library building.

The City has secured $2.5 million in funding to assist in the renovation of the interior library building and is prepared to work with the selected partner(s) to create a welcoming and efficient space for literacy, cultural and event programming.”

The timetable described in the RFP is as follows:

“Phase I (February) – Focuses on proposer(s) qualifications, experience, and other factors; and
Phase II (March – April) – Respondent(s) who meet qualifications will be invited for interviews.

Phase III (May) – Finalize recommendation to the City Council.” 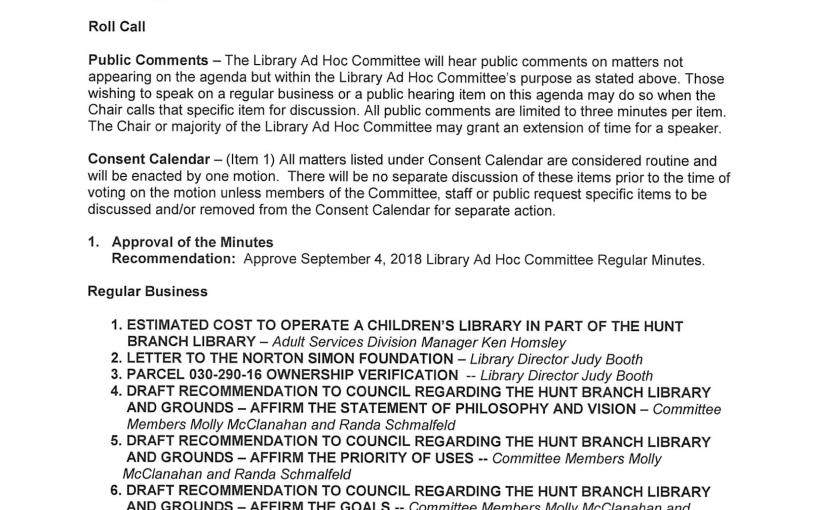 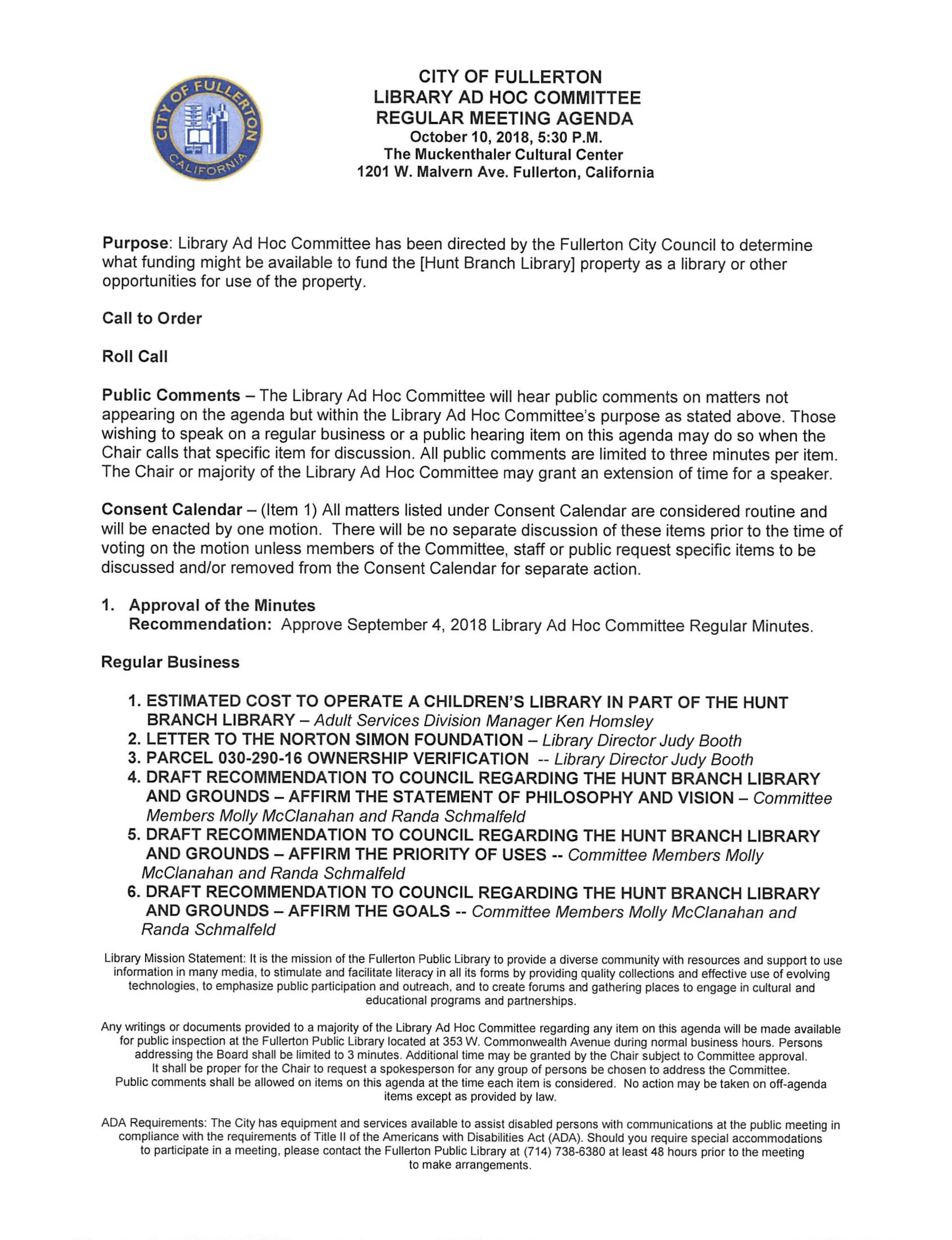 The Library Ad-Hoc Committee will have its fourth and last meeting on Wednesday, October 10, , 1201 W. Malvern Ave. (park in the main lot at the top of the hill).  The Committee is expected to draft a recommendation to the City Council regarding the possible uses for the Hunt Library. The agenda for the meeting can be found at this link: October 10 Library Ad Hoc Agenda

The Landmarks Commission hearing for the Hunt Library, that we originally expected for the same evening, has been postponed, so you can attend the Ad-Hoc at the Muckenthaler instead. We will alert you when the Landmark hearing is eventually scheduled. 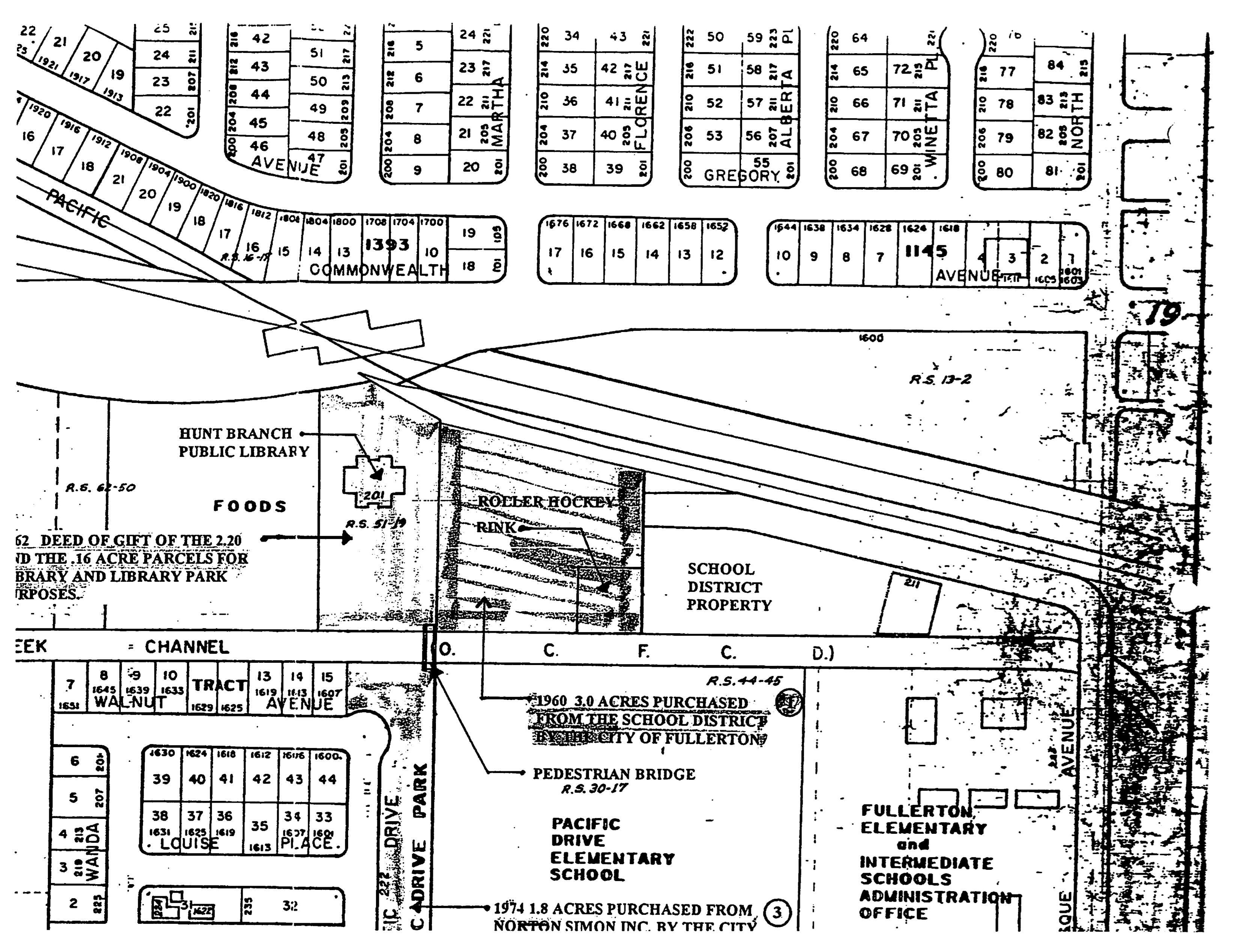 Over a hundred people turned out Monday night, Sept. 24 to hear renowned architect and historian Alan Hess lead tours through Fullerton’s Hunt Branch Library before his evening presentation about the building and its architect next door at Pacific Drive Elementary School. The free program was organized by SaveTheHunt, a community group dedicated to keeping the currently closed library in public hands. The library is normally closed to visitors because the building and grounds are leased to neighboring Grace Ministries International (GMI), but access was arranged through the Fullerton Public Library. The large number of attendees necessitated two successive tours led by Mr. Hess, who spoke about the structure’s integration of indoor and outdoor spaces and other mid-century modernist design strategies employed by the library’s architect William Pereira.

Mr. Hess is a co-founder of Preserve OC a non-profit dedicated to preserving Orange County’s architectural and cultural heritage. He is the author of more than twenty architecture books, the latest entitled The Ranch House, copies of which he later signed for the public.

The program continued next door in Pacific Drive’s Multipurpose Room, where SaveTheHunt organizer Jane Reifer welcomed the audience to the presentation. Following brief remarks about the history of the Hunt Branch, Fullerton Public Library Director Judy Booth spoke about the Library Ad Hoc Committee, of which she is an ex-officio member, charged with formulating a recommendation for the facility’s ultimate use to Fullerton’s City Council. (The Ad Hoc meets next at the Muckenthaler Cultural Center on October 10 at 5:30 p.m.).

The presentation by Alan Hess traced the varied career of William Pereira from architecture school days in Illinois to Hollywood, where he became an art director who won an Oscar for Best Special Effects in the early 1940’s. Eventually returning to architecture, Pereira formed a partnership with classmate Charles Luckman. Mr. Hess noted that the team’s landmark 1953 CBS Television City in Los Angeles was the first studio designed specifically for television production, and, thanks to good planning, is still operation today. The prolific team also designed the original Disneyland Hotel and the iconic “Theme Building” in the center of Los Angeles International Airport.

Later, Pereira’s own firm designed San Francisco’s Transamerica Tower and the original buildings of the Los Angeles County Museum of Art (LACMA). Mr. Hess emphasized that good planning and individual architectural character were the keys to Pereira’s success in designing not only buildings, but entire campuses, like the University of California, Irvine, and the master plan for the City of Irvine itself. He cautioned that, although Pereira’s 1973 wing of the L.A. Times complex just received Landmark status, many of William Pereira’s buildings have been lost, and that the LACMA buildings are threatened by that museum’s new master plan.  Mr. Hess stressed the importance of protecting buildings like the former Hunt headquarters building, now own outright by GMI, and its companion Hunt Branch Library both as important local structures and internationally significant buildings to serve future generations. 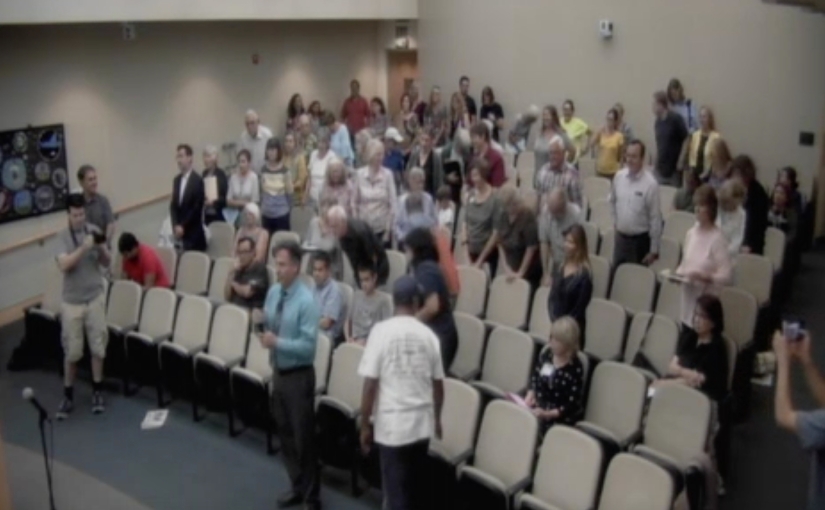 A strong show of support for maintaining the Library Board of Trustees as appointees of Fullerton City Councilmembers kept the Council from passing an agenda item that would have seen them begin to supplant the Trustees on the Board as early as December. The agenda item, one of several in series ostensibly intended to streamline and update city commissions and committees, drew widespread public opposition. Dozens of attendees to the City Council’s meeting last Tuesday evening stood when Mayor Doug Chaffee asked who in the audience was against the change, while not a single member of the audience stood when the Mayor asked who supported it.

Following a presentation by the City Clerk Mayor Chaffee attempted to assuage audience concerns about eliminating appointed Trustees, assuring the crowd that no one on the City Council intended to supplant the Board, even though the agenda item’s appearance  was engendered by Councilmember Jennifer Fitzgerald’s May 1 City Council comments, wherein she directly suggested exactly what the city staff report recommended on Tuesday night–that the City Council appoint its own membership to serve as Trustees to the city’s Library Board and create a less powerful Advisory Board, to which each Councilmember would appoint a representative. Since the founding to the library a century ago, members of the City Council have appointed members of the public, not themselves, to serve as Trustees.

Mayor Chaffee advocated passing other staff recommended changes to the Fullerton Municipal Code regarding the library, but met with direct opposition to even this course of action because the changes to the language were nowhere reproduced in the staff report attached to the City Council agenda. Many audience members were strongly circumspect about making any changes without know what they were and how they would affect the operation and governance of the library and its properties. The City Council, including Mayor Chaffee who is in tight race for the 4th District O.C. Board of Supervisors in November, ultimately backed down from passing anything.

Many community members were very suspicious about the motives behind the measure, ostensibly intended to bring the city’s code into compliance with the amended state code the governs libraries in California. Lacking any stated or printed reason for a revision that called for Council Members to serve as Trustees, some thought it might be an avenue for allowing the city to more easily absorb revenue generated by sale of library property–like the Hunt Branch. Both Doug Chaffee and Jennifer Fitzgerald have voiced support for selling the facility, currently closed to the pubic and leased to neighboring Grace Ministries International.